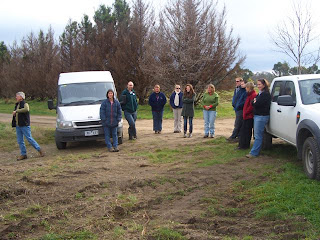 It was time to let Landcare Coordinators from other parts of the catchment (GBCMA) know what we’ve achieved, as well as the huge challenges still facing the community and environment. 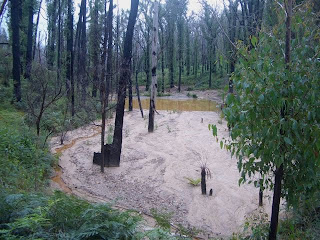 Rain following the fires did incredible damage in some areas, turning clear-flowing streams into sludge and silting up dams and stream-beds throughout the catchment. This (at left) used to be a lush, wet gully above a sizable dam. The gully is gone and the dam full of sediment. 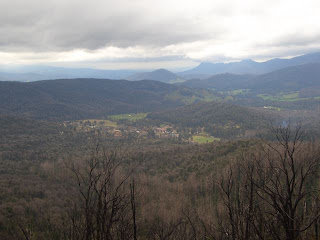 The town of Marysville is slowly starting to re-build, and the scars on the surrounding mountains will also take a long time to heal.

Still, the bush is regenerating well in many areas. Although most of the Alpine Ash and Mountain Ash forests still look like a matchstick landscape, many trees have re-sprouted and are covered in new shoots. And the dead, standing trees are not wasted. They’ll provide important hollows for lots of different animals in the decades to come, once the re-sprouting trees recover and seedlings grow to form a new forest. Possums, gliders, marsupial mice, parrots, kookaburras etc all require hollows for denning and nesting, as well as a healthy forest, for survival. 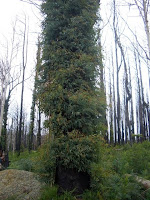 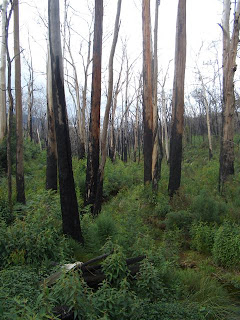 And regeneration on the forest floor in many areas has been spectacular. In some areas plant species that had all but disappeared from the landscape are making a comeback; their seeds have lain dormant in the soil for perhaps decades, waiting for the right conditions to germinate and start a new cycle of life – ‘Acuna Matata’.

We’ve even been told of a rare marsupial mouse, the not-so-Common Dunnart (Sminthopsis murina) that has been found, for the first time ever!, in the Cathedral Ranges. Presumably it was there before, but in such low numbers that no-one ever saw them. Dunnarts, along with many other species in our landscape, are known to be post-fire specialists; they need the occasional fire to create the right kind of habitat for them to flourish, and the species-rich regrowth that’s regenerated after the fires is perfect. 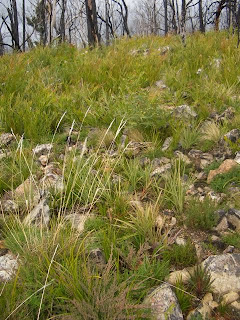 Just like the example at left on a peak overlooking Marysville. here there are grasses, lillies, flowering peas, creepers etc and in spring there will likely be orchids and other wildflowers. It’ll be worth visiting again in Sept/Oct/Nov!