July 2nd 2010
Heather and Steve Joblin were assisted in repairing their large revegetation project which was burnt by the fires in Strath Creek. 300 trees were added to the steep hill sides.
Volunteer workers included 8 ANZ bankers from Southbank in the city , Timothy from Treeproject plus Justus and Janet Hagen from Landcare. The chatter over a BBQ lunch centered around events at the World Cup Soccer .
This multi-cultural group had representatives from France, New Zealand, India, Holland, England and Paraguay as well as a few Aussies. Several pairs of shiny new gum boots were christened on the day .
Thanks for your help guys. 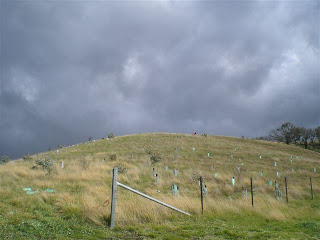