The enormous post fire efforts of the Upper Goulburn Landcare Network and its many supporters was acknowledged at last week’s Victorian Landcare Awards presentation.

The Fire Recovery Award was received on behalf of the Network by Terry Hubbard UGLN President and Chris Cobern, Fire Recovery Coordinator at Government House from the Hon Alex Chernov AO Q 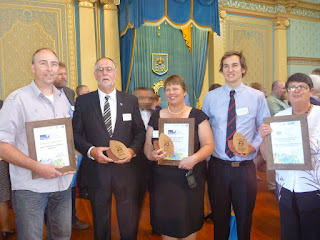 C Governor of Victoria and the Hon Ryan Smith Minister for Environment.

A great deal of credit for the Award must go to those landcare people who met at Terry Hubbards place just three days after the fire and who feared a backlash against Landcare and the environment in general.

They felt that the UGLN with its ability to respond quickly and decisively and having strong environmental links with the community were well placed to find out the immediate needs of those affected, be proactive in coordinating volunteers and to this end …. work commenced immediately. This Award also reflects the earlier efforts of people like Bridget Clark, Janet Hagen and their bands of volunteers.

In total the UGLN with fantastic support from volunteers has undertaken a recovery program with an estimated value of over $3m.

All our efforts have been well supported by the Goulburn Broken Catchment Management Authority, in particular Tony Kubeil who entrusted our volunteer Executive and Coordinators after the fires to roll out what has been an astonishing program.

The UGLN efforts have also been recognised for the nationally prestigious Banksia Awards (finalist) and as winner of the Regional Landcare Award.