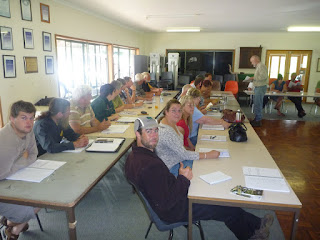 Over the weekend of 19th & 20th February 23 people from the Flowerdale area attended the sixth free UGLN weed management course. The course was held at the Flowerdale Recreation Reserve pavillion and run by NMIT lecturer and Kinglake resident Kevin Chandler. A delicious morning tea and lunch was provided by Flowerdale’s own catering business ‘Molly’s Kitchen’.

Since April 2009 we have been running free Weed Identification and Control Workshops and Farm Chemical Users Courses throughout the fire affected areas of Murrindindi Shire. The courses have also been held in Strath Creek, Marysville and Kinglake; and the next one is planned for the 2nd & 3rd April at Yea. They have all been well attended averaging around 20 per course with 34 attending the first one in Kinglake.