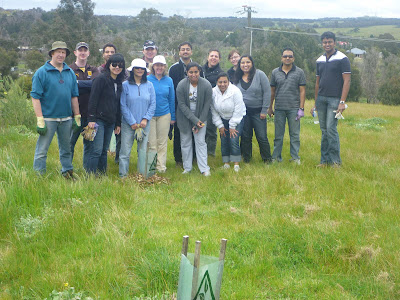 September 27 & 29th 2010
ANZ Finance Dept – 17 volunteers
plus Janet & Chris.
Todays project was to finish a garden make over for Mary-Anne & Chris Mount View Rd Wandong .
The house was saved from the fire but their garden was devastated.
We planted exotic shrubs in the newly landscaped front garden and native shrubs around the fencelines . Lots of shovelling piles of mulch around the garden and watering plants in ( believe it or not the soil was quite dry ) and general tiding up .
Chris had a bad morning and travelled many kilometres before arriving at Wandong .
The he set out from home very early but unplanned for events kept cropping up ! The seedlings in Yea needed an urgent watering , Alan Stafford needed accomodation booked , the landcare equipment trailer needed to be picked up from Kinross Farm but the gate was locked and to top it all off he had a flat tyre when he finally got to Wandong . Poor Chris , he was relieved when the day was over.
Another team from the ANZ was doing a similar job for the next door neighbour the following day with supervision supplied by Treeproject

Posted in ANZ, Fire Recovery, lorax, tree project, Wandong
← A nice letterWhere did all these plants come from ? →