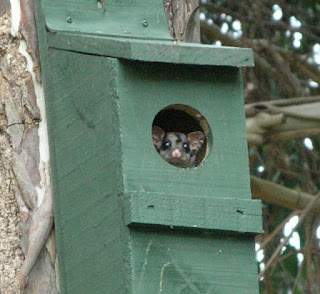 When I saw the bare blackened trees that were left standing after Black Saturday, I wondered what had happened to the possums, birds and other small mammals that had once lived there.

Of the many who lost their homes on Black Saturday, our smallest and neediest.
have required more help than others in finding and rebuilding a new home. The destruction of so many trees in the 2009 fires meant the loss of sanctuary to many of our native wild life. Those animals who miraculously survived the flames soon found themselves in greater danger from predators because of the loss of their homes in the trees. 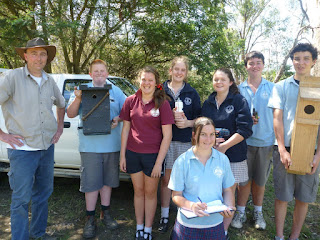 A dedicated group of people from Upper Goulburn Landcare Network have set about providing new homes for some of our furry and feathered friends. They have embarked on a project to set up nesting boxes by attaching them to the blackened trees, providing new homes for these animals. The boxes, made from timber, have different sized entry holes through which the creatures can access the warmth and safety they provide. Larger marsupials, like ringtail or brushtail possums, need a larger access hole than the smaller feathertail or sugar gliders.

The Landcare network has received help from many varied groups of volunteers, including Kinglake Scouts, students from Yea High School and Christ Church Grammar, Shepparton Mens’ Shed and ANZ volunteers. These people have donated their time and skills to make and locate the nesting boxes where needed. The boxes are attached to the trunks of trees, at varying heights near branches so that the ani 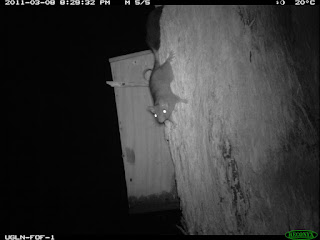 mals can get to them easily.

We have several boxes at our place and the other day I received a big surprise when I went to check to see if it was being used. I slowly lifted the lid so that I wouldn’t frighten any new inhabitant. As I looked in, I saw two sleepy, golden eyes peering up at me inquisitively. Nestled in some dried grass at the bottom of the box was a ringtail possum who seemed puzzled by the intrusion. His little round face seemed to be asking: Who’s interrupting my sleep? Don’t you know what time it is? When he was satisfied that I presented no danger, he rustled around a little in his bed and curled up again to dream his possum dreams.

It’s heart-warming to see the return of our native wildlife, and to know that they have a safe place to live once again.